We go hands on with one of the most expensive nail clippers on the market. Is it worth the astronomical price? Find out in our detailed review. 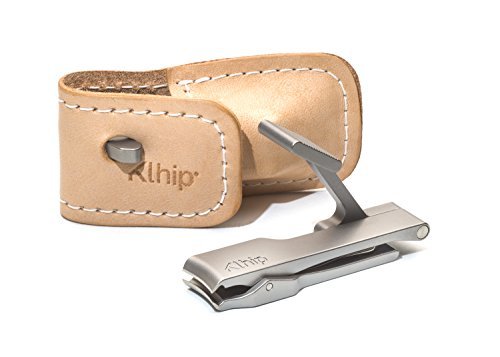 Arriving in a plain white box, You would be hard pressed to guess that the contents are perhaps the most expensive pair of nail clippers you will buy in your lifetime.

1. Keep the nail clippers safe – Dropping nail clippers to the hard floor below can throw off the factory alignment. The leather pouch protects the clippers in the event of an accidental fall.

2. Keep the nail clippers sharp– The leather case prevents friction from other toiletries in your toiletry bag from rubbing against and dulling the blades.

On the front of the leather Pouch the Klhip logo has been branded onto the leather.

If you look closely you will notice that part of the nail clipper actually hooks onto the leather pouch flap, keeping the pouch closed.

To open the leather pouch you will have to unhook the nail clipper leaver.

With the pouch open you are now free to remove your nail clipper from it’s home.

The first thing that will hit you is just how small the nail clipper actually is. It’s barely larger than a AA battery.

Once you get over the tiny size you can focus on the sleek satin finish and a design that is unlike any nail clipper you have ever seen before.

The design is sturdy and with proper care look like they will last a lifetime.

In fact, when you first take the nail clipper out of the box you will likely be puzzled as to how it actually works. Pressing down on the lever does not appear to do anything.

Just like traditional nail clippers, the Klhip clipper has to be “opened up” before you can use it.

You do this by rotating the lever or arm from the bottom of the clipper to the top like so:

A small magnet located on the base of the nail clipper stops the lever from opening up accidentally.

If you look closely at the above picture you will be able to make out a small textured grip at the front of the tweezers. While it might not look like much, the grip noticeably stops your fingers from slipping off the clippers during use.

With the lever rotated to the top, your Klhip nail clipper is now ready for use.

Squeezing the blades requires such little pressure that you can actually use your forefinger to press the lever down if you so choose.

One thing that stood out is just how easy the Klhip clipper is to hold. While it felt a little awkward at first in the dominant hand, it was much easier to hold in the off hand, in this case my left.

The awkwardness appeared to come from just how different the Klhip Clipper is to hold to a traditional levered nail clipper. With continued use the holding the clipper in either hand soon came naturally.

One of our testers has wrist issues and commented that he was impressed with how effortless the Khlip clipper was to use.

The blade of the Klhip Nail clipper is much straighter than you will find on cheaper nail cutters.

During testing we found that the straighter blade required four cuts to completely remove a finger nail. The blades are sharp and when combined with the easy to use lever, cutting nails was nearly effortless.

Where the straighter blade really shined was on the feet. For normal toe nails the straighter blade made it much easier to get a good cut. Just don’t expect a miracle; if your toenails are so thick that you use nail shears to remove them then the Klhip will struggle just like a traditional clipper.

One thing stood out during cutting nails, the clippings do not fly off the clippers into orbit. Instead the toe nail clippings drop neatly below the clipper.

After testing the Klhip nail clipper over a few months we noticed a slight flaw with the lever design.

When you press down, the lever rubs against the metal surface below:

As you might have guessed, rubbing metal on metal is going to leave a mark.

And sure enough, when you fold the nail clippers back up, a small mark is clearly visible:

Obviously this has no impact on the effectiveness of the nail clippers. But if you are someone who likes to keep their products perfectly presentable (and if you pay this much for nail clippers then you might be), the only way to keep the Klhip Nail Clippers scratch free is to not use them at all.

Besides the price, the only other potential downside to the Klhip Nail Clipper is the lack of a metal file with the cuticle hook.

Now if you are anything like me you will never use the rasp on the rear of the your nail clippers anway and it’s absence won’t be missed.

But if you found use in the built-in nail file then you may be scratching your head at how such an expensive product could leave it out.

So now for the million dollar question:

Is the Klhip Ultimate Nail Clipper worth the price?

To be honest it entirely depends on you. While the Klhip Ultimate Nail File is arguably easier to use, it cuts just as well as nail clippers around the $15 mark.

If you are someone who sees the value in a quality product designed to last a life time then you should add the Klhip Nail Clippers to your list of wants.

But the rest of you could buy a cheap pair of nail clippers every year for the next 20 or so years for the same price.

The Khlip Nail Clippers are not for everyone. But if you decide that they are for you then you will be more than happy with them.