Just as we start exploring electric shavers under $100, Wahl makes its first appearance.

Wahl is a big name that focuses on providing quality products at a budget price. Unfortunately, trying to balance quality with cutting cost has seen Wahl strike out as often as they have hit a home run (as we saw when we reviewed their nose hair trimmer).

So did Wahl knock it out of the ballpark with their Custom Shave? Let’s find out. 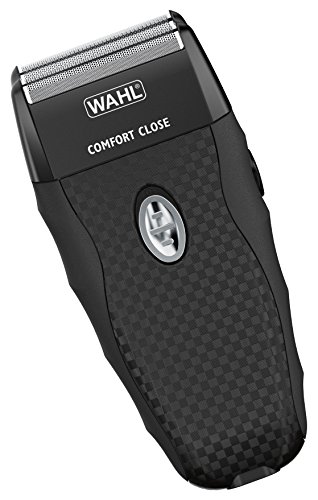 As is often the case with Wahl products, the pack an awful lot of goodies into one box:

Now you may be looking at that list a little puzzled. Yes, Wahl does, in fact, include three different shaving heads.

At first glance, they all look identical, but on close inspection, you can see that the foil guard on each has a slightly different pattern.

From least to most aggressive:

As I was trying to line the shaving heads up for a photo, one thing stood out.

The foil is thin. Very thin. So thin that you would assume that Wahl has used Aluminum foil.

While I will reserve my final judgment for the shave, the foil guards felt incredibly flimsy, like it would not take much to tear them.

Pressing down on the foil with minimal resulted in it creasing:

To this end, Wahl has included two cheap pieces of plastic to help prevent you from damaging the foil guard. The first is the protective foil guard cover:

The protective cover slides over the foil guard and clips directly into the body of the trimmer.

Clipping the cover it was harder than it looked. The cover kept popping off until I got it in the correct position and even then it did not take much than a bump for it to pop back off.

If you were to throw the Custom Shave at the bottom of the bag, I doubt the cover will still be on when the time to use the shaver rolls around.

But what about the two shaver heads left over? They need protecting too.

Wahl has included a clear plastic container to keep them safe:

The container itself is pretty poor quality and while it will keep the spare foil shaving heads safe, I have doubts as to how long it will last.

The plastic used is barely thicker than the type you find on a tray of strawberries.

However, you won’t be opening up the container too often at all. Once you discover your favorite shaving head of the three choices, you probably won’t ever swap them over.

Now let’s take a closer look at the shaver itself.

The Custom Shave has a similar shape to the Braun Series 1 Smart Control, which as far as shavers go, we were pretty unimpressed with.

Wahl claims this shaver is “Made in America” but goes on to note “of domestic and imported parts”. I personally do not believe a whole lot of the shaver is made in America. I reached out to Wahl to confirm but their customer service team just parroted what was written on the box.

The rubber grips on the side of the shaver are ribbed and line up perfectly with your fingers.

While some of you may find it cheesy, I am actually partial to the checkered plastic that covers the top of the shaver. It reminds me of carbon fiber.

Hiding at the very base of the shaver is the charging socket.

In what seems like an odd design choice, Wahl has decided to have the socket stick out from the rear of the shaver so that it is clearly visible.

While this may be functional it would have been just as easy to recess the socket, keeping it hidden from view, but that is just a minor complaint.

Flipping the shaver over reveals an uninteresting black plastic rear.

If you look closely you will be able to make out an odd shape recessed into the rear of the shaver. This is actually a hidden pop-up trimmer.

Placing your thumb on the three ridges and sliding up will see the trimmer pop up.

The sliding motion to get the trimmer to release is quite jerky and stiff. It’s certainly not as well designed as similar pop-up trimmers by Panasonic or Braun.

Even the metal guard of the trimmer came with what looked to be marks from the manufacturing process.

But one thing the Wahl does have on its competition is that the trimmer sticks out past the shaver head. This means you can actually see what you are trimming without having to tilt your head at an awkward angle in front of the mirror.

Trimmers are definitely Wahl’s specialty and it performed remarkably well, this is in part because of its size. The trimmer is wider than any other shaver/trimmer combo in this price range.

Unfortunately, the larger trimming head also made it slightly trickier to detail fine areas like sideburns, goatee or mustache.

If you look off to the side of the trimmer you will notice an oval-shaped button:

Pressing and holding the button releases the shaving head, allowing you to remove it.

Underneath the foil guard hides two sets of razor blades. One for each foil guard.

If you look at the razor blades you will see that they are actually a series of sharpened metal semi-circles.

When the Custom Shave turns on, the razor blades vibrate left and right incredibly quickly, cutting any hairs that come close.

All good things must come to an end and Wahl states:

Replace the foil head every 6-12 months. Replace the cutter bar every 12-18 months

You can buy each of these replacement parts separately from Amazon.

I think that just about covers everything on the shaver. Let’s place the Custom Shave on charge so that we can take it for a test drive.

The charging cord only works on 110V which means the Custom Shave won’t be your electric shaver of choice on your trips around the world.

Annoyingly, there is no battery indicator on the shaver, so you will not know when charging is complete. Oddly enough, other than the 18 hours Wahl recommends you charge the shaver before your first shave, there is no hint at what the minimum charging time actually is.

I found I was getting around 30-40 minutes of use from a single charge before the NiCad battery would run flat.

With your Custom Shave fully charged, it is now time to take it for a whirl.

The first thing you will notice when you pick up the shaver is that it is surprisingly comfortable to hold, given it’s flat shape:

The rubber grips conform nicely to the hand and even those of you with wet hands or a shaky grip should be able to get a good grasp of the shaver.

So now for the million dollar question:

How well does it shave?

When you slide the silver power button up the shaver roars to life.

And I do mean roar. The shaver is incredibly loud as the 10,000 cycle per minute head reaches full speed.

For it’s size this is definitely a powerful shaver, you can feel the force of the motor vibrating in your hand.

The result is a surprisingly close shave.

Your hairs are no longer than a single days growth.

The Custom shave has no way of lifting hairs that grow in different directions or trimming longer hairs. Instead, it works best when your hairs are a short stubble.

This is especially noticeable on the neck and jawline where the foil guard really struggles.

But if you are in a pattern of shaving daily then this won’t be a problem for you. Those of you who have let your hair grow just a little bit long can cut it down to size with the pop-up trimmer on the rear.

I’ll be honest, the “sensitive” shaving head sucked. The holes were too small to properly capture my hairs and unless you have incredibly fine whiskers you will likely find the same.

Swapping over to the “Comfort Close” or “Ultra Clean” shaving heads was the only way I could get a satisfactory result.

In fact, if you have thick and coarse beard hairs then it is likely you will only want to use the “Ultra Clean” shaving head. The larger holes in it’s shaving head will be more likely to capture your beastly beard hairs.

Unfortunately, the reliance on these two shaving heads also means that there is no real option for those of you with sensitive skin. A consequence of the close shave is that the shaver is much more aggressive on your skin, which can lead to irritation.

Just be mindful that the Ultra Clean shaving head is VERY aggressive. If you have sensitive skin or have not used an electric shaver before then this shaving head can leave your face an irritated blotchy mess.

If your skin is super sensitive and prone to breaking out when using an electric razor then this is probably not for you.

The more I shaved the more I was worried that the thin foil guard was going to tear. Fortunately my worries were unfounded and the foil held up to my 2 weeks of testing. Still, I do not feel confident that It would last through months and months of use and I suspect there is a reason why other shaving brands choose not to use a soft foil guard.

After you have finished shaving you are going to be left with a whole bunch of hair clippings you have to remove from the shaver.

Since the Custom Shave is not a sealed unit you cannot simply hold the cutter under water with the power on.

Instead, you must remove the foil head and gently tap it out.

Err… Either the instruction manual is wrong or Wahl forgot to include my cleaning brush.

Now I am lucky in that I have a few cleaning brushes I can choose from that came with the other shavers I have reviewed. It’s likely you won’t be so lucky.

The Custom Shave is definitely one of the trickier electric shavers to clean since they recommend you do not use water to clean it.

Spending a little extra on your shaver will jump you up to the much nicer Braun Series 3 (review here) which is very easy to clean by comparison.

Now the only thing left to do is pack the shaver up in it’s little carry pouch until your next shave (likely tomorrow since this works best on short stubble).

At least Wahl got the size of the bag right. You can fit everything that comes in the box inside the carry pouch. Funnily enough, the Custom Shaver is one of the few shavers that can actually manage this.

Wahl’s best attempt at making a dedicated face shaver worked out pretty well for them. While it may not have the same attention to design of the similarly priced Philips Norelco 6000 Series or the Braun series 3, it can definitely hold it’s own in giving a close shave.

My main concerns are the foil quality. I would love to be proven wrong but after 2 weeks use all of my foils have creases in them. While this in no way affects the shave quality, it may be a sign of things to come and that is something I am genuinely concerned about.

If you love Wahl’s products then it is likely you will be very happy with this shaver.