In the world of personal grooming, everyone has heard of Wahl. Some of you might even have their beard trimmers (I know I do!).

The problem with big name brands is that they can fall into a bad habit. They do not need to make a quality product. They can instead rely on their recognized name alone to move units.

So is Wahl’s most expensive nose hair trimmer more stud than dud? Read on to find out!. 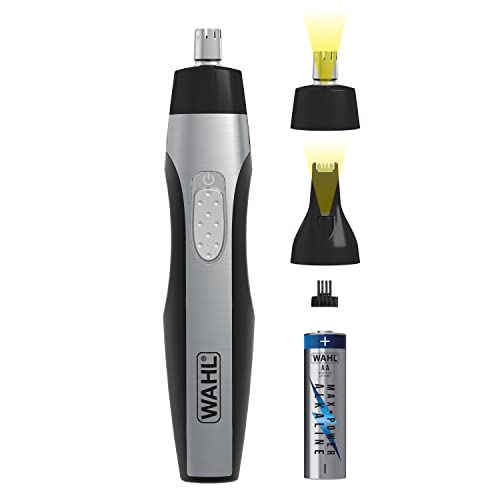 Gifting a nose hair trimmer is the best way by far to hint that your creepy uncle has a nose hair problem, so the packaging is at least a little important.

I can also report that despite being wrapped in plastic, the nose hair trimmer was very easy to remove from it’s packaging. No retractable knife needed!

We use the word supposed because ours did not come with a plastic blade cover, even though there is an empty space for one inside the box. We believe this was an oversight during manufacture as the box was completely sealed when we bought it.

I use my nose hair trimmer exclusively in the bathroom so this is not a deal breaker for me. But if I was to carry the trimmer around in the bottom of my bag all day then I would definitely want a cover to keep crumbs and dust off it.

After all, this thing is going up your nose. You want it hygienic.

While the box may have been missing pieces, I loved the fact that Wahl decided to include a battery in the box!

While it may have been a brand I had never heard of (Pairdeer) and so cheap and nasty that it barely lasted over an hour of use (seriously), but at least it allowed me to use the nose hair trimmer straight out of the box.

This is something that just about every other nose hair trimmer brand we tested cheaped out on.

I really hate seeing the dreaded:

Printed on the side of a box. Despite the poor start with the missing cover, Wahl has already redeemed themselves by including a battery.

I was disappointed to note that Wahl did not include a cleaning brush inside the box.

From personal experience, a cleaning brush is a gift from the heavens when trying to remove snot and hair build up on the blade of the trimmer.

Take a good look at the trimmer before you pick it up. It will never look this good again. Seriously. The shiny chrome plating is a serious fingerprint magnet.

After handling the trimmer it quickly became apparent why all the other brands chose to use a matte-plastic rather than a gloss surface. This thing is fingerprint city.

Funnily enough, while the design looks quite fetching, it is worth mentioning that the rear of the nose hair trimmer is much less sexy:

Curiously, in all the advertisements and promo pics for this nose hair trimmer, none of them showed the rear. Instead, all pictures focused on the front.

I felt this was a little dishonest as the ugly side is not apparent until you hold the trimmer in your hand after you have dropped a wad of cash on it.

Stop the unrealistic portraying of nose hair trimmers in the media (I would protest that!).

Let’s take a close look at the trimmer head.

Wahl made the right choice to go with a rotary trimmer head. After testing 19 different nose hair trimmers we found that the rotary heads performed the best for cutting ear and nose hair.

The trimmer head can be removed to give it a good clean out or to swap it over to the side action head.

Hiding inside the guard is the part that does all the dirty work. The razor blade.

The nose trimmer head uses a traditional two blade set up. While this style cuts good enough, you may need to pass over the same area a few times before it manages to catch every single hair.

We much preferred the dual blade set up found on the Panasonic ER-GN30-K (read the review here) which required fewer passes during our testing.

Okay, so now that you have seen the basics of this nose hair trimmer, it’s time to turn this bad boy on!

The first thing to do is slide the battery inside.

Located on the rear of the nose hair trimmer is a battery compartment. Judging by the arrow I simply slide it down to open it.

Okay, I position my thumb over the arrow for grip, apply downward pressure annnnnd….

Nothing. My thumb slips right off. The darn battery cover is on tighter than I expected.

Round two: the two-handed approach. I now have two thumbs pressing down on the rear cover, trying to make it budge.

After about 20 seconds of pushing and Karate sounds, I managed to get the cover off. Damn, that thing was on tight.

It immediately became apparent why other nose hair trimmers chose “twist-to-open” battery compartments over slide down. If my hands were even slightly wet or greasy I would never have been able to open this damn thing and I would have been cursed to walk the earth with bushy nose hair. Or, you know… buy a different trimmer.

Update: After a week of testing I am happy to report that the battery compartment does loosen over time. I can now open it with a single hand.

After what felt like the battle of the century, I was able to jam the battery in and close the cover.

I know it shouldn’t have, but it felt like an accomplishment. Now it’s time to turn this bad boy on.

The power button is located on the front of the trimmer and slides up and down to turn on and off respectively.

Upon toggling the switch up and down a few times, it quickly became apparent just how loose the switch is.

Unlike the battery cover which put up much more of a fight, the switch turns on with the lightest of touches.

From experience, this behavior is not generally a good thing. If the nose hair trimmer is bouncing around at the bottom of your bag, it can switch on by itself, leaving you to explain that awkward vibrating sound coming from your bag to those around you.

There was one other thing that quickly became apparent when turning the power switch on. And that is the light:

Each and every time the power is turned on the light flickers to life.

During my use of this nose hair trimmer the light annoyed the beejeezus out of me for a couple of reasons:

1. You have to hold the trimmer a certain way, otherwise, the light shines straight into your eyes while you trim your nose hairs.

2. The light beam shoots straight up. I often found the light illuminating the outside of my nose holes rather than the hairs inside. In my opinion, the light should have been angled at the tip top of the trimmer, this way it would actually light up the hairy forest as you trim.

The light definitely felt like more of a gimmick than a genuine help. If your bathroom is not well lit up you would be better off investing in a small lamp than relying on this.

Okay, with the unboxing complete it is now time to focus on how the trimmer held up to use.

As far as the cut goes, it got the job done. The trimmer slid inside the nose without any pain and exited without leaving behind any nicks or cuts.

This nose hair trimmer did take a little longer to get the job done than the Panasonic ER-GN25-K with multiple passes required before we were satisfied that visible hairs hand been trimmed.

As I touched on before; the light in the trimmer head is DAMN annoying and lit up our eyeballs like the Fourth of July. It was seriously like trimming your nose hairs while staring into oncoming traffic.

With some fiddling around we were able to attach the head backwards so that the light would not shine through the hole but it would pop off every now and again.

If you already bought this trimmer, color it in the light with a black marker. This will dull the light enough that it does not bother you. Just be mindful that you will need to do this continually as it can be scratched off during cleaning.

Why don’t I let the accessories introduce themselves:

Yep, that pretty much sums it up.

The side action trimmer head has such a small cutting area that it will miss just about every hair you throw at it. Even if you can manage to line it up, coarse hairs make the blade quiver with fear, causing it to pull rather than cut.

And don’t get me started on the eyebrow guard. Sliding the guard over the side action trimmer is supposed to allow you to safely trim stray monster hairs from your eyebrows without shaving them off completely.

The guard falls off at the slightest touch. None of our testers were brave enough to even let this thing go near their eyebrows, fearful that they would have to draw an eyebrow back on for the next few months.

Like most models tested, the extra attachments proved to be gimmicks and should not be taken into consideration when choosing this nose hair trimmer over another.

While it can be a touch on the loud side when it comes to trimming your ear hairs, it definitely is not lout enough to wake up those sleeping in the next room.

Now on the back of the box Wahl proudly claims:

Wet/Dry for use in the shower

Now to me, this seems like a straightforward enough statement. The nose hair trimmer must be waterproof, right?

Well, yes and no.

This nose hair trimmer works just fine in the shower and cut’s through wet nose hairs just as well as dry ones.

The problem came when I dried down the nose hair trimmer with a towel and then opened up the battery compartment and removed the battery. This is what greeted me:

Water. And quite a lot of it.

Examining the slide on cover, it is unsurprising that this amount of water made its way inside, there is little in the way of a seal.

While it may not have affected the running of the nose hair trimmer, if this went unnoticed it would slowly cause the battery connectors to rust.

So if you DO want to use this nose hair trimmer in the shower, be sure to dry out the battery compartment after each and every use, otherwise, this trimmer will eventually rust out. But do you really have time for that?

The Wahl 5546-200 does everything you would want it to, except averagely. Every single feature seemed to be on the right track but was let down in one way or another. We simply cannot recommend it over the Panasonic ER-GN30-K which was a much better all-round trimmer for the ears and nose.