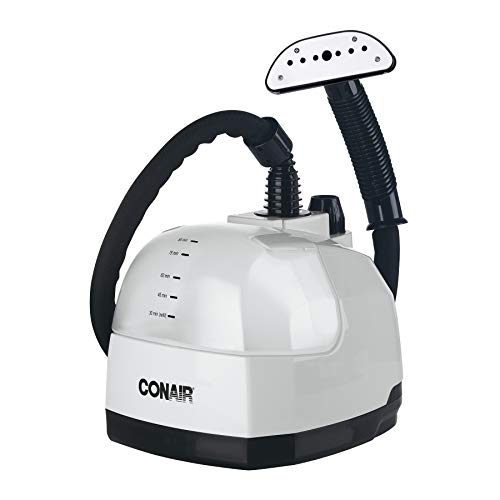 From the number one selling garment steamer brand in the United States comes this surprisingly small full-sized standing steamer. The Conair GS28 Garment Steamer sits 14.2 x 17.5 x 17 inches and weighs in at just over 10 pounds.

The easy-to-fill, large capacity removable water tank holds up to 80 ounces of water and heats up and is ready to steam in as little as 45 seconds. This allows for up to 90 minutes of continuous steam time, and an auto shut-off feature is included which kicks in when the water level is too low, thus preventing the device from overheating.

The Conair features a 360-degree rotating hanger, allowing the user to easily cover all sides of the garment being steamed. The hanger also comes with clips for steaming and de-wrinkling pants. The GS28 sits atop easy rolling casters thus allowing for easy transportation and storage around the house.

The device comes with an energy-saving steam pause feature for both safety and efficiency. Safe for use on garments of all fabric types and household drapes and upholstery, the powerful steam produced by the GS28 also kills bedbugs and dust mites. The 5-foot hose and telescopic pole allow for steaming garments of various lengths and heights, and the t-nozzle from which the steam is admitted ensures a more even steam and heat distribution.

Customer reviews of the GS28 are largely positive, however some minor design flaws have been noted. One consistent issue cited is that the steamer works perfectly for permanent press clothing but takes quite a bit of time to de-wrinkle more stubborn, cotton clothing that is not permanent press.

Another common complaint is that when steaming pants attached via the hanger clips, only one side can be steamed at a time. If the pole is rotated around to steam the opposite side, the user will find the pole directly in the way. This means the pants must be removed and flipped over manually in order to steam the opposite side. A minor nuisance, but a nuisance nonetheless.

A complaint common to many standing steamers holds true with the GS28 – the hose is not long enough for most user’s liking. And it has been noted by several customers that when the steam head nozzle is held lower than the hose, water will often drip out, causing the garment being steamed to become wet.

If you intend to use this product for many years and fix it when it might become broken, you may well run into problems. At least one customer experienced that when the steamer head of his GS28 was broken during travel, he contacted the manufacturer to purchase a replacement but was promptly told that replacement parts were not sold. Since he was beyond the limited 1-year warranty offered, his only option was to buy an entirely new steamer.

Overall, the GS28 has a positive track record with customers and performs adequately as a full-size steamer. If you are looking for a moderately priced standing steamer, this may well be a good choice.