Can the Emjoi Emagine stand the test of time? Or does it show it’s age against much more modern epilators?

Find out in our detailed review of the Emjoi Emagine epilator.

There are currently three different models of Emjoi’s top of the line Emagine Epilator.

While the models may appear different at first glance, they all perform very similarly when it comes to hair removal.

The most expensive of the Emjoi Emagine models and the focus of our review.

Originally released in 2009, for the most part the Emjoi Emagine AP-18 design remains unchanged. The AP-18 is corded and can only be used plugged in to an electrical outlet. In terms of features and performance it is identical to the rechargeable model.

Given the rechargeable Emagine can be picked up for a similar price to the corded model we fail to see why anyone would choose this model. Even if you believe you will only epilate near a power outlet, it is nice to have the freedom to go elsewhere if you so choose.

Emjoi claims that this is the first epilator on the market designed especially for men. This is a bit of a stretch since it is essentially the above corded model with a “manly” color change.

The only real difference is that the Emagine 4Men comes with a shaver head and trimmer cap attachment. While it was nice to be able to trim longer chest and leg hairs to a suitable length for epilation, it performed poorly at anything else. Since most men will already have a dedicated beard trimmer, the shaver and trimmer head add little to the experience.

In our rigourous testing of all three models we failed to notice the Emjoi Emagine 4Men perform any better than the other two models when it came to epilation. 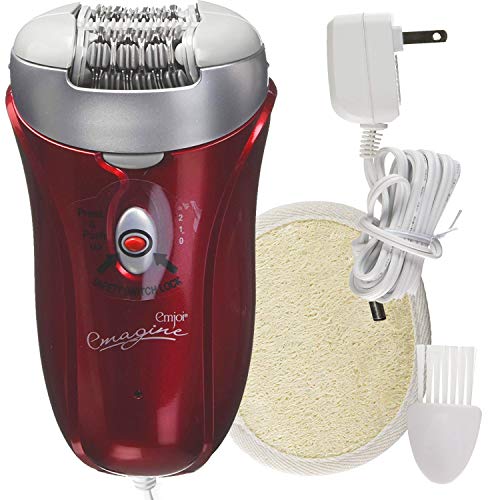 If you were to tear open the box of your brand new Emjoi Emagine cordless epilator, this is what you would find:

Let’s break it down:

We found it interesting that the instruction manual lists all the included accessories above except the exfoliation glove. Yet all three models of the Emjoi Emagine come with it.

We are a little puzzled as to why Emjoi chose to include the exfoliation pad in the packaging. The pad is of very poor quality and fell apart after just a few uses.

If we had to describe the looks of the Emjoi Emagine in one word we would use dated.

The glossy, purple plastic design may have looked like a premium epilator way back in 2009 when it was originally released. But compared to more recently released epilators, the exterior does not reflect the price paid.

We also noticed there was no grip at all on the Emjoi Emagine. The entire handle of the epilator is covered in a glossy and somewhat slippery plastic.

While the Emjoi Emagine can only be used dry (as opposed to in the bath or shower) a rubber grip or even some ribbed plastic would not have gone astray.

Front and center on the Emagine is the power switch:

If you look closely at the silver switch you will notice a blue rubber button in the middle.

The rubber button operates the travel lock. If you attempt to slide the switch up without pressing the blue button in the switch will not budge. This prevents the epilator from turning on by mistake at the bottom of your luggage.

So to operate the switch you have to press the blue button down while sliding the silver switch upwards. While it all sounds complicated it is actually very simple and the epilator can be turned on with a push of your thumb.

The power switch will allow you to choose from three settings:

While the switch works well enough, we found it to be a little on the stiff side.

Flipping the Emjoi Emagine over reveals a rather plain looking rear:

For the most part the rear of the epilator is covered in a smooth plastic.

When you use the epilator this is where your fingers will rest. Given that the area isn’t being used for much else; it feels like an oversight on Emjois part by not including a textured grip here.

The only area of note on the rear of the Emagine is the charging socket:

This socket where you will plug in the charging adapter. The other corded models (AP-18 and APMS) will have the power cord plugged into here.

Just above the socket, printed in bold lettering you will find the country of Manufacture. Emjoi manufacturers the all three Emagine epilator models in China.

At the top of the epilator you will find the star of the unit, the epilating head:

The epilating head contains 72 tweezers in total. Some people call these tweezers “discs”. Whatever you call them, the Emjoi Emagine contains more than any other epilator on the market.

But numbers only tell half the story. While there are 72 tweezers/discs only 12 will be in contact with your skin at any one time.

Each set of tweezers also only opens up 1mm wide, that is less of an opening. That is roughly half the size of the opening that what you will find on Braun, Philips or Panasonics epilators. So while there are double the tweezers in contact with your skin at any one time, the effective “plucking area” of the epilating head is roughly the same as it’s competitors.

Between the two spinning epilating drums is a comb. According to the instruction manual this is supposed to help lift short and flat laying hairs, getting them ready for epilation.

If you look closely at the above photo you can also see mini-combs spread out between the tweezers that assist with directing hairs to the tweezers.

The epilator head certainly isn’t pretty and with all the gaps between the molded plastic you would be hard pressed to tell that this is a high-end epilator.

Just below the epilator head, on the front of the unit you will find a small gray button:

This is the epilator head release button:

Pressing this button will allow you to completely remove the epilator head from the handle.

There are two instances where you will want to remove the epilating head.

The first is to install the shaver head attachment, sold separately. The shaver comes included in the box of the Emjoi Emagine 4Men AP-18MS model.

In testing the Emagine shaver head failed to impress and the cordless model does not suffer with it’s absence.

The only other time you will remove the epilating head is when the time comes to clean the epilator.

To make cleaning easier you are able to remove the collar from around the epilating head. By doing so you will be better able to clean under the tweezer heads with the cleaning brush included in the box.

While removing the collar certainly did make cleaning easier, we still found it difficult to remove all the plucked hairs that hid between the two spinning drums.

Included in the box is a plastic protective cap that clips over the epilator head:

The protective cap will keep your epilator heads clean and hygienic when not n use.

In order to charge the epilatore you are going

The charging cord is over 5 ½ foot in length. That should be long enough to reach from most bathroom electrical outlets to the countertop. Make sure you hang on to the twist tie that keeps the cables neat in the box, you can use it to shorten the cable if it is long enough to hang or gets in the way.

The Emjoi Emagine can only be used on American soil (or local country if you purchased it internationally). The charger is rated at 120V. If you were looking for a travel friendly epilator this isn’t for you.

To charge the Emagine you slide the charging plug into the socket on the rear of the epilator:

Here is where the charging socket placement gets a little bit silly.

The indicator light goes on and stays on while charging. The only time it will turn off is if you either disconnect the charger or turn the power on. While the Emjoi Emagine cordless model can be used with the cord plugged in, it does not appear to charge during use.

We found ourselves getting roughly 30 minutes of use off a single charge. When the battery runs flat it will take 8-16 hours to fully charge the battery.

Emjoi does not say what battery is inside the Emagine. However, since this instruction book recommends that you discharge the battery every so often then we are going to assume it is NiMH.

We reached out to Emjoi via their contact form for further clarification on the battery but did not get a response.

With the battery of the epilator fully charged it’s now time to take the Emagine for a test drive.

For the purpose of testing we enlisted the help of 5 other users. The following contains summaries of their experience with the Emjoi Emagine cordless epilator.

As touched on earlier in the review, the Emjoi Emagine is slippery. While the purple glossy plastic look pretty, your fingers easily slide across it. Emjoi really did the Emagine a disservice by not including a textured grip on the rear.

The shape itself is fairly ergonomic and was just as easy to hold in the left hand as it was in the right.

While the power button is clunky, it serves it’s purpose, allowing you to select your desired speed setting.

With the power on you will realize just how loud the epilator is. This is one of the loudest epilators we tested. In addition to the whirr of the motor, the tweezers make a loud rattling sound as they open and close. Do not use this while people are sleeping nearby.

When it came to epilating the legs we found that the Emagine was up to the task. However, every single tester failed to get the epilator to remove all hairs in a single pass. Even when following the instructions to the letter and moving incredibly slowly.

We are unconvinced that the two spinning epilator heads, even with it’s total of 72 tweezers could outperform single epilator heads found on the competition.

We also found that removing fine blonde hairs was difficult, even on the slow speed setting. The lack of a built in torch to highlight these fine hairs did not exactly help the cause.

While Emjoi claims you can use this epilator to remove chin and upper lip hair we do not recommend it. You only use a single epilator head on these areas. We don’t need to tell you that this cuts the epilators efficiency in half.

Using a single epilator missed so many hairs that it was a lesson in frustration. In addition to this, the wide epilator head made it impossible to be accurate.

We would also like to warn you to keep the epilator clear from damp environments. One of our testers ruined a model by keeping the epilator in the bathroom where she had steamy showers. The tweezers began to show signs of rust in just three weeks.

Unfortunately the Emjoi Emagine is showing it’s age. While it may have once been a revolutionary epilator; it now fails to keep up with the modern competition.

Accessories and features that come standard on other epilators are very obviously missing. Even basic ones like a built in light to see finer hairs or a rubber grip to make it easier to hold. The epilator isn’t even waterproof.

Given that the Emagine series are still priced comparatively to high end modern epilators, the Emagine represents poor value for money.