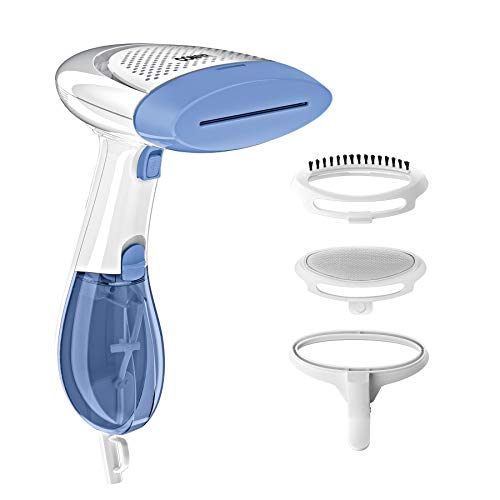 Weighing in at just 3 pounds and measuring 5.8 x 7.8 x 12.8 inches, the Conair Extreme Steam Fabric Steamer with Dual Heat (model number GS23) is one of the most powerful portable steamers on the market.

Let’s break down the benefits further:

The new Dual Heat technology featured in the Extreme Steam creates more concentrated steam for up to 30% hotter output.

This enables you to penetrate heavier fabrics and the company claims the product can release wrinkles up to 5 times faster than other industry-leading steamers, all while killing both dust mites and bed bugs.

The Extreme Steam heats up in as little as 75 seconds and allows for roughly 15 minutes of continuous steaming. This is more than other compact steamers like its rival the Pure Enrichment PureSteam, but not nearly as much as the larger steamers on the market.

The Extreme Steam does have a feature that most other steamers do not, however: the option of two heat settings allows the user to safely steam a wider range of fabrics.

However, multiple users have complained that the product quit working after about 4 months, citing that the steamer would appear to be on as the green power light lit up but no would be producing no steam.

Often this is the result of blockage and can be fixed by simply forcing air through the upper tube with a syringe or similar device, however occasionally it is the result of the pump needing to be primed, which is a much more elaborate (though not very complicated) fix.

Several customers complained of having used the product only a single time, after which it stopped working completely.

Often these users had let the product sit for a significant period of time after the first use (sometimes several months), and nearly all reported the same issue as mentioned earlier.

the green power light came on, indicating that the product was not entirely broken, but no steam was produced. This could be an indication of a fairly significant design flaw.

How does it compare to the best in class?

Q: How hot does the Conair Extreme Steam get?

With the dual heat system, you can set the temperature according to the fabric that you’re steaming. 395 °F for the not-so-delicate material like cotton and wool, and 200 °F (=93~°C) for your satin, nylon and silk fabrics.

Q: How do I clean my Conair steamer? How do I de-calcify my steamer?

A: Decalcify your steamer in these 3 steps:

Our opinion is much more positive than negative; we are overwhelmingly satisfied with the quality, power, and compact nature of the Extreme Steam.

This steamer is a worthy investment, especially considering its extra features and low cost. Just bear in mind that it’s quite bulky – a little too big for the frequent traveller.

Hope this Conair Extreme Steamer Review helped bring you one step closer to finding that perfect steamer for you!