Lint is a problem, particularly with knitwear, and while it’s soft and fluffy it isn’t cute.

Many a perfect white outfit has been ruined by an attack of dark lint, and how my heart sinks when my little black dress comes out of the dryer looking like it was out in the snow.

Here are some quick ideas on how to eliminate lint, followed by reviews of the best lint removers currently on sale.

Before and after using a lint remover

7 Items that are Good at Removing Lint from Clothes

Whether plugged into the mains or battery operated, a lint remover will quickly and easily get your sweater looking as good as new.

Gone are the days of messy, awkward sticky paper rolls – now, you can drop a battery operated lint remover brush into your luggage, and you’re good to go.

A lint remover brush can be used on anything from sweaters to suits, but you want to make sure you’re buying the best. Once you’ve found the lint brush that’s right for you, we guarantee it’ll be your new best friend!

So, have a look at our reviews of some of the best lint removers on Amazon, including battery operated lint brushes, and make the smart choice. 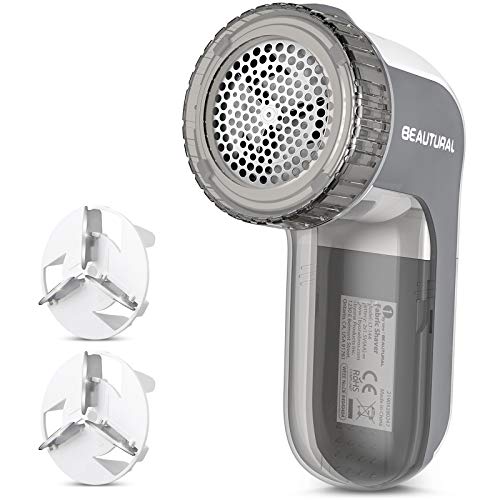 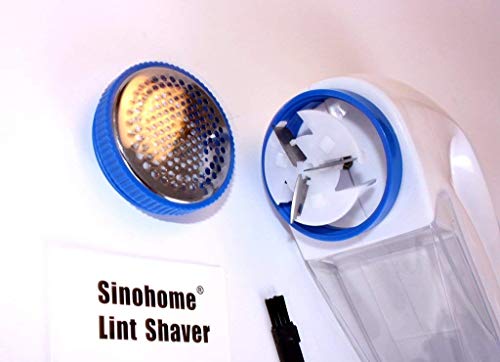 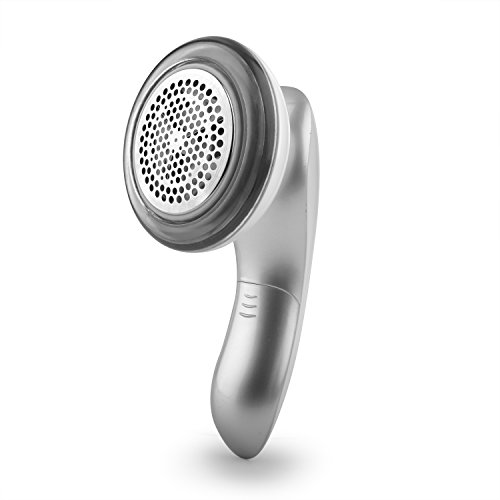 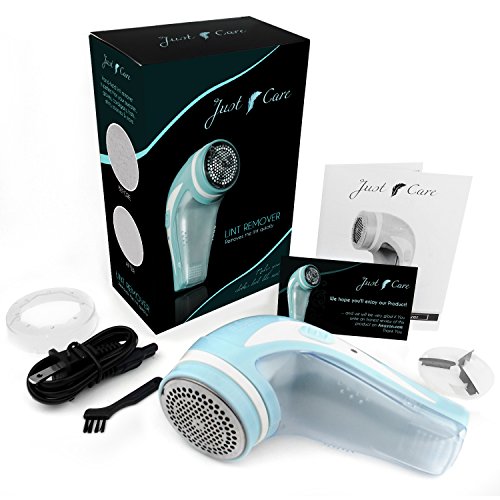 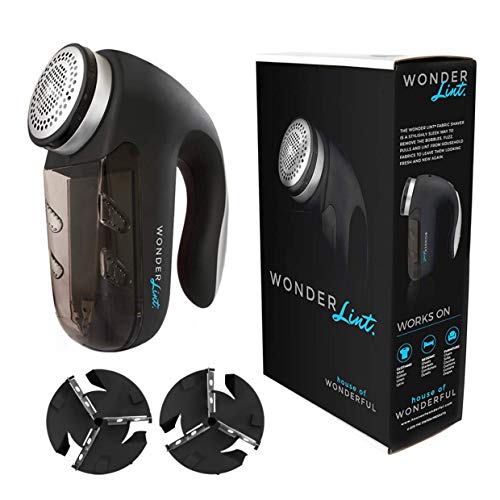 It’ll make short work of fabric bobbles, is light enough to pack into a suitcase, and has been described as ‘the perfect lint shaver’.

The Simohome is a corded lint remover. This means there are no batteries to worry about or replace.

Using a lint remover is almost intuitive, and the Simohome is no exception, despite the slight confusion caused by poorly-worded instructions, which have been translated into English from the original Chinese.

The Simohome lint remover runs at 6,000 rpm, giving a quick, professional result. Your garments will be lint free, and undamaged, in minutes.

It is worth noting that, like most electric or battery-operated lint removers, the Simohome is not suitable for use on long-fiber or delicate fabrics, such as silk or cashmere. These fabrics are best treated with a manual lint brush.

It is fabric friendly, and gentle on even delicate items.

Its lightweight, portable design makes the Pure Enrichment the ideal addition to your vacation or business packing, while the battery operation means you won’t have to worry about incompatible hotel sockets if you’re travelling abroad.

Dog owners, however, may be disappointed, as the Pure Enrichment doesn’t seem to be as good at removing dog hair as it is at removing lint and general fluff. If you’re a dog (or cat) person, the best advice is to get a pet whose fur matches the colors you prefer to wear.

For general purpose lint removal, or to smarten up a sweater or suit, the Pure Enrichment works well and offers value for money.

This company makes one of our favorite portable garment steamers.

A stainless steel grille protects your clothes from the blades while you’re using the lint remover, which is corded, meaning no batteries to replace.

This lint brush is, like its fellows, easy to use, although it can sometimes be a little slow, especially on large or thick fabrics.

This lint remover is very similar in style and function to the Simohome, although the Simohome does come out on top in user reviews.

If you want to know for sure, for yourself – why not buy both? It never hurts to carry a spare, after all!

The Toshinecare Deluxe Lint Remover is battery-operated, taking four C batteries. Having a battery-operated lint brush really is the best option, as not only do you not have to worry about compatible sockets when travelling abroad, you also have full range and freedom of movement.

This means you can easily remove lint from larger clothes, curtains, and large areas of fabric and upholstery.

However, there’s no need to panic if your batteries die on you, as the Toshinecare can also be used with A/C power, so you can just switch out, and keep going.

One of the drawbacks of the Toshinecare is that it is not recommended for more than a minute – 60 seconds – of continual use.

And, as it goes, you’ll be stopping at least this frequently to empty the lint collection tray. Obviously, this is frustrating, particularly if you have a sweater that’s covered in lint.

5 More Tips on How to Remove Lint from Clothes

Get your FREE "Product name" Guide

0shares
Special offer for our visitors

Get your "Product name" Free Guide

We will never send you spam. By signing up for this you agree with our privacy policy and to receive regular updates via email in regards to industry news and promotions