Moo Review may collect a share of sales or other compensation from the links on this page. 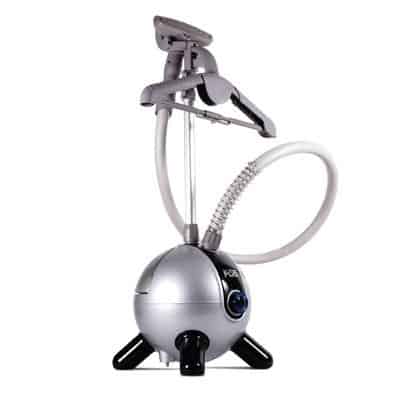 The Laundry Pod Upright Steamer comes priced quite a bit lower than its counterparts.  The design looks encouragingly futuristic.  These factors may tempt you to try it out…  Is it worth the risk?  Let’s see.

The Laundry Pod Upright Steamer looks intriguingly space pod-like, much like its manufacturer’s name.  The base is sleek and silver (or white and green), and you get the impression it could launch itself into orbit after a brisk session of steaming your garments.

It feels rather disappointingly light and a bit cheap—which I guess was to be expected, considering its price.

It’s shipped and sold by Tye-mart on Amazon and comes with a 1-year manufacturer’s warranty.

The Laundry Pod Upright Steamer’s stand extends to 5 feet 3 inches high when fully extended, which is quite good; The more usual height is 5 feet or shorter.  It’s rather lightweight, which is not so good.  You don’t want a garment steamer toppling over because the garment weighs more than the steamer does.

The water tank can hold up to a third of a gallon, which isn’t terribly impressive for an upright steamer.  A gallon is more the norm for the industry.

Unlike its competitors on the market, it doesn’t come with any little bonus attachments at all like a lint brush or a crease tool. Not a dealbreaker but some of those accessories are surprisingly handy.

It promises 40 minutes of steaming on its 1/3 gallon water tank.  This sounds overly ambitious and frankly isn’t good news.

Because in order to make good on that guarantee, the steam would have to be terribly weak to make that bit of water last that long…

Well, on the plus side, your Laundry Pod Upright Steamer is excellent for carting your groceries.  If this is the first fabric steamer review you’ve read, let me be clear – it’s not a good sign when that’s the best thing one can say about a garment steamer.

And to be scrupulously fair it does somewhat okay at getting wrinkles out.  If you have plenty of time to spare, and work hard at it.  (In which case, really, you could have just whipped out the dreaded ol’ ironing board and gotten better results.)

On the down side, it doesn’t really excel at its job of garment steaming, and provides a lot of inconveniences besides, such as the hose kinking up and the steam sputtering.

Try this one instead.

All products featured in our reviews are purchased by us at retail price. We do not accept free products or payment in exchange for reviews. All opinions represented on this website are our own.

Putting together giant guides like this one is an expensive and time-consuming process. This site is wholly supported by affiliate commissions on purchases made through our links, at no cost to you.

We’re committed to publishing unbiased and detailed guides and just want you to know.

For more information on how we work, read this.

Find an error? Facts are incredibly important to us. If you notice a guide needs a little freshening up or contains errors then please either leave a comment or contact us through this form and we will fix it!