If you have been reading our other reviews then it will come as no surprise that we love Panasonic’s nose hair trimmers.

The ER430K is Panasonic’s premium model, even going so far as to include a mini vacuum cleaner inside. As you would expect, the ER430K is the most expensive nose hair trimmer in their lineup.

But does this mean it’s Panasonic’s best nose hair trimmer?

Let’s find out together as I closely examine everything about the Er430K nose hair trimmer. 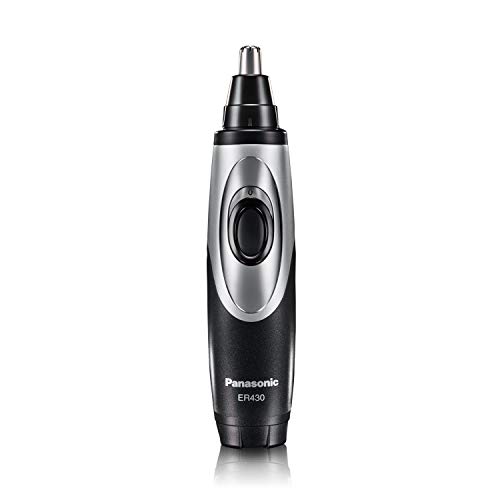 As always I am torn on Panasonics decision to stick with cardboard for their packaging.

While the box definitely does not look as well presented as trimmers wrapped in clear plastic, it is recyclable and easy to open with your bare hands.

That last point is a huge benefit.

You wont need scissors, knives, blowtorches or the strength of Thor to open this packaging .

Seriously, some of the nose hair trimmers we tested were darn near impossible to open. Looking at you, Philips Norelco. Get your packaging together.

Once you open up the box you will be greeted with a nose hair trimmer, a lid and a carry bag.

Like the protective lid on the Panasonic’s ER-GN25-K This one has vents in the top to allow the nose hair trimmer head to completely dry after being cleaned.

This design is just fine for those of us who only trim our nose hairs in the comfort of your bathroom. But what if you carry your nose hair trimmer at the bottom of your bag, to trim those sneaky nose hairs while outside the home?

The holes in the lid are big enough to allow crumbs and dirt to slip through. Check it out:

Fortunately this design choice is less of an issue than it was on the ER-GN25-K because this time around Panasonic has included the zippered travel bag.

Simply slide the nose hair trimmer inside, zip the bag up and you are good to go.

The lid of the nose hair trimmer also contains a small mirror, for checking your nose hair mirrors on the go.

At first I was puzzled as to why the mirror was blurry but it turns out there is a plastic film on top, preventing it from being scratched. With the film removed, the mirror is clear and reflective.

The mirror is quite small and unless you find yourself travelling to remote destinations, likely won’t be of much use to you.

Like with all their nose hair trimmers, Panasonic does not include a battery in the packaging.

As a household that has kid’s constantly stealing batteries for their toys, spare batteries are a luxury. I usually solve this problem by stealing them from the TV remote.

Manufacturers: If your product needs a battery, include it in the box! My wife will thank you when she goes to turn the TV

The ER430K is one of the more oddly shaped nose hair trimmers on the market.

At first glance, the ER430K looks like any other nose hair trimmer. It’s not until you pick it up that you realize something is amiss.

Turning the nose hair trimmer on it’s side reveals the ER430k’s true shape:

Awww, Look how chubby it is!

Because of the larger than usual body, you are forced to grip this nose hair trimmer with a clenched fist.

Fortunately the blade somewhat makes up for this. The dual edged cutting blade (found on all Panasonic models) cuts more nose hair with each pass than any other nose hair trimmer we tested.

To reach the blade you simply twist the nose hair trimmer head to the right and it pops right off.

While most nose hair trimmer blades look like this:

Panasonics blades have an extra cutting edge on top:

It’s getting on to the part of the review where we test this trimmer, so it’s time to figure out how to get the batteries inside.

Twisting this dial clockwise causes it to pop off the trimmer base, revealing a battery slot.

The dial was nearly impossible to twist off the first time we used the trimmer. I had to give it to another tester who is a rock climber (awesome finger strength) in order to undo it.

Fortunately, once the seal had been broken, the dial was much easier to turn and even my weak little fingers could open it with little effort.

With the dial cover off the battery compartment becomes clearly visible. Simple slide a single AA battery inside and you are in business.

With a battery inside all that was left was to flick the switch to set the nose hair trimmer into motion.

The on switch is something I like about Panasonic nose hair trimmers. It turns on and off smoothly but not easy enough for the nose hair trimmer to turn on by mistake while at the bottom of your bag.

With the unboxing out of the way it is time to test whether or not it is worth dropping the extra cash over Panasonics other amazing models.

The ER430k is the only nose hair trimmer on the market to have a built in vacuum.

As I mentioned earlier, the ER430K has a vacuum built right into it.

Air is drawn into the trimmer head, through a filter and out the vents in the side of the nose hair trimmer.

The collar that sits underneath the trimming head is actually a filter.

If you look closely you can see the filter is little more than a fine mesh stretched across a plastic collar.

Air is sucked through the filter and any hairs and bits of dry skin are collected here.

While the vacuum worked fine for ear and nose hairs, the majority of beard and eyebrow trimmings still fell to the sink below.

I have to wonder if this is a solution to a problem that didn’t really exist. I either trim my nose hairs in the shower or over a sink, washing them away afterwards.

The filter needs to be emptied every few trimming sessions or the build up will slow down the trimming head, resulting in hairs being pulled rather than cut. Ouch.

Personally I didn’t really like the vacuum. Not only did it add another step to cleaning the nose hair trimmer, but also made the trimmer extra noisy.

That said, I am confident that there are people will find this feature really appealing, it just didn’t suit my nose hair trimming routine.

As we have come to expect from Panasonic’s trimmers, they do one thing and one thing well:

The narrow head coupled slides easily into your ear or nose leaving you room to move. Once inside the dual edged blade whisked away any hairs that came near.

I twisted, pushed and prodded the trimmer into my nose with little care for my wellbeing and only nicked myself when I deliberately pressed hard into the side of my nose.

While it may not be fool-proof, the guard protected my nose from almost everything but the poorest of trimming techniques.

The trimming had seemed to cut just as well whether my nose hairs were wet or dry. Yep, you can even use this nose hair trimmer in the shower if you want to.

The head of the ER430K is exactly the same as the Panasonic’s ER-GN30-K . See for yourself:

So you would think that both of these nose hair trimmers would off the same experience, right?

While I would not have picked it if I did not personally compare the two nose hair trimmers myself, the ER430K tickles the nose more.

I believe this is because of the included vacuum. The slight feeling of air being sucked in tickles moves the hairs further up in your nose resulting in what I can only describe as a tickling sensation.

I am not a fan at being tickled at any time, least of all when I am trimming my nose hairs. It may just be that I have super ticklish nostrils but these ER-GN30-K managed to trim my nose hairs without the unwanted tingly feeling.

Panasonic also claim you can use this trimmer on your eyebrows, beard and other facial hair.

Panasonic is stretching the truth.

This trimmer absolutely sucks at trimming bushy bits of your face where the hairs grow close together, namely beard, moustache and eyebrows.

Why nose hair trimmer manufactures insist on pushing their product as a “do-it-all” solution is beyond me.

If you want to trim your beard, buy a beard trimmer. If you want to shave your hair, buy a shaver…. You get where I am going with this.

Perhaps the loudest out of all nose hair trimmers we tested. It’s cause isn’t helped by the vacuum which gives the sound a much higher pitch than other trimmers.

If you have sensitive hearing you will probably want to avoid using this nose hair trimmer in your ear canal.

Because the ER430K is completely sealed, it can be dunked under running water. This makes it easy to rinse the nose hair trimmer after use.

Unfortunately, if a rinse isn’t enough to remove clipped hairs and other build-up then you are going to have to take the nose hair trimmer apart.

The inclusion of the vacuum filter adds a whole extra piece that requires regular cleaning. For what little use I had for the vacuum in the first place I found this to be an annoying extra step.

You would think that with the filter needing cleaning that Panasonic would include a cleaning brush in the box. This is very obviously missed and is odd that it wasn’t included, given that it is found on lower models.

With the added parts, this nose hair trimmer took the longest to clean out of all nose hair trimmers we reviewed . While the extra time can be measured in tens of seconds, it was long enough to annoy me.

While the ER430K is does it’s job well, and cuts hairs to a length that will keep them hidden.

We just feel that Panasonic outdid itself with it’s cheaper model, the ER-GN30-K .

It’s funny, if Panasonic’s cheaper model didn’t exist then this very likely would have been our favorite nose hair trimmer that we tested. Despite the minor gripes, this is a quality trimmer.

The only time we would recommend the this trimmer over the ER-GN30-K is if you need the vacuum feature. If you don’t need this feature then it just isn’t worth the extra noise, cleaning time and cost.