When it comes to electric callus removers, Emjoi is one of the best known brands on the market.

Part of the appeal is the wide range of models and rollers that make up the Emjoi Micro-Pedi range. Today I will be examining the Micro-Pedi Nano. Everything from it’s looks to performance will be placed under scrutiny.

So let’s jump right into the review.

The Emjoi Micro-Pedi Nano is available in three different models:

The Micro Pedi Nano is the base model and the subject of this review.

Besides the slick coat of paint, the only difference is the coarseness of the roller. The Micro-Pedi MAN ships with a Super Coarse roller.

If you have tougher than normal calluses then I would recommend going with the Micro-Pedi MAN over the Nano. The more abrasive roller is more effective when it comes to the removal of stubborn dry skin.

You would think that just because the this model is corded that it would have more power. Nope. The Micro-Pedi Corded rotates the roller at the same 30 times per second as the battery operated model.

The only advantage the corded model has is that you don’t have to purchase batteries. But this strength is also it’s weakness and you will need to use the callus remover near a power outlet.

For the price you also get a travel pouch and cleaning brush but even these extras cannot justify the price jump between the corded and battery operated Micro-Pedi Nano’s. 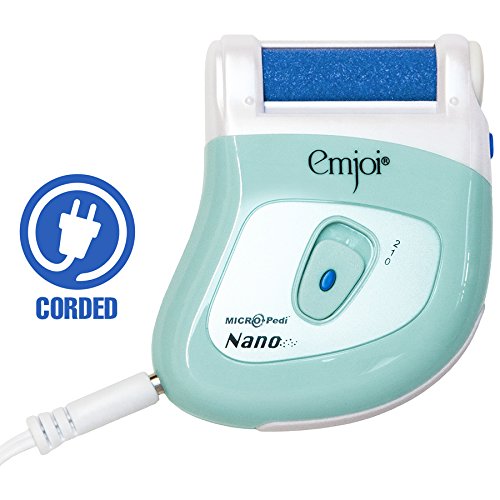 The Micro-Pedi Nano ships clamshell packaging. And I hate it. Attempting to open the packaging with your bare hands will reward you with the very calluses that the Micro-Pedi is designed to remove.

When you finally manage to open the packaging of your brand new Micro-Pedi Nano, this is what will be waiting for you inside:

Let’s break it down:

Do you notice anything missing? I do.

Emjoi has broken a what I believe to be a very important rule in the product world.

If a product requires batteries to be usable then include them in the box.

Now fortunately I review products for a career and have a good amount of rechargeable AA batteries handy. But the rest of you may have to raid the batteries from your TV remote if you do not buy them beforehand.

The first thing you will notice when you lay your eyes on the Micro Pedi Nano is the unusual handle design. Rather than the longer handle found on most callus removers, the Nano’s is short and fat:

The shape has been specifically designed to minimize size while keepthe Micro-Pedi Nano comfortable and easy to grip.

At the front of the Micro Pedi you will find the power button:

While it may look weird that the power switch is off center, it serves a specific purpose. By angling the power switch you can easily reach the button with the thumb of the hand that is holding the Micro-Pedi.

If you look closely you will notice that the power switch is actually made up of two separate buttons; a red push button and a white sliding switch.

The red button acts as a safety lock and you will be unable to slide the power switch up without pressing the red button in. While this is easy to accomplish with a single movement from your thumb, it makes it much more difficult for the Micro-Pedi Nano to turn on by accident, grinding anything that comes near.

The head of the Nano is near identical to every other Micro-Pedi that Emjoi manufactures:

This is the part of the Micro-Pedi that does all the dirty work and is actually made up of two separate pieces; the roller head holder and the roller that sits inside.

Unlike the Amope Pedi Perfect, the roller part of the Micro-Pedi sits recessed in the unit. Due to the plastic surrounding the roller you will only be able to press a small section of the roller against your skin at any given time.

The photo below will give you a better idea of the gap between the roller and the handle.

Located on the side of the Micro-Pedi is a small gray switch:

This is the roller release switch. If you slide the switch down it will eject the roller from the holder.

And that’s it. That’s all it takes to remove the Micro-Pedi Nano roller. Much simpler than release of the Amope Pedi Perfect. Thanks to a spring-loaded trigger, the roller pops right out.

Installing the roller is just as easy. Simply push the roller into the holder until you hear it click into place.

The roller itself is essentially a piece of sandpaper wrapped around a plastic cylinder.

When you turn the Micro-Pedi Nano on the roller will begin to rapidly spin completing 30 revolutions per second. When the roller comes into contact with your skin it will buff away your calluses.

On the rear of the roller holder you will notice six slots:

The holes allow the shaved skin to escape Micro-Pedi Nano. And trust me, there is going to be a lot of it.

As you move the Micro-Pedi over your calluses, the roller head will grind the skin down to a fine dust. Many people often confuse the skin dust with smoke coming from their electric foot file. That’s how fine the dust is.

The skin dust then escapes out these holes in the rear of the holder instead of building up inside the unit.

When the Micro-Pedi is not in use you can slide the plastic protective cover over the head of the roller.

As you can imagine,t he roller itself is quite abrasive. If you were to leave it at the bottom of your bag the roller will scratch anything it comes into contact with. The protective cover acts as a barrier, keeping nearby objects safe from harm.

I was able to carry the Micro-Pedi Nano in my bag all day and the cover was still on when I removed it from my bag at night. However, this may have been luck. The cover pops off if you press upwards on it with very little effort.

The Rear of the Micro-Pedi Nano isn’t much to look at:

Just plain white plastic. The main feature of note on the rear is the battery compartment.

Sliding your thumb across over the lower section of the Micro-Pedi Nano will remove the battery cover.

Again, Emjoi does not include AA batteries with their Micro-Pedi. I simply used some rechargeable AA batteries I had laying around.

With the batteries inside you are ready to take your Micro-Pedi Nano for a test-drive.

The Micro-Pedi Nano comes with the Extra Coarse roller head in the box. Don’t let the name fool you, this isn’t the coarsest roller that Emjoi has to offer.

Emjoi offers a wide range of replacement rollers These rollers range from gentle, for those of you with soft skin to extremely coarse, capable of removing even the most stubborn of calluses.

Rollers don’t last forever and with continued use will wear down and become less effective. When you notice that your Micro-Pedi Nano just isn’t buffing away calluses as well as it used to then it is time to replace the roller.

How long each roller lasts entirely depends on the toughness of your skin and the how frequently you use it.

So now for the part where I test the Emjoi Micro-Pedi Nano and see just how well it actually performs.

Just one problem: I am fortunate enough not to suffer from cracked heals or calluses.

Fortunately for me I didn’t have to look too far to round up a team of testers who suffered from ugly build ups of dead skin. I was actually surprised by just how common calluses and cracked heals are.

So I had the fun job of watching people buff away dead skin from their feet and inspect the results. The things I have to put up with for the sake of a review…

So let’s start by discussing the unusual shape of the Micro Pedi Nano:

Testers loved it. Not only was the smaller size easy to hide away in the handbag or bottom of a draw but it was darn easy to hold.

Whether left or right handed, you will have little difficulty gripping the curved handle. The only complaint came from testers with larger than normal hands who much preferred the larger grip on the Amope Pedi Perfect.

The handle can be held a variety of different angles depending on your grip. You will need to experiment with which works best for you since testers who had calluses on the arch of their foot or toes held the Micro-Pedi differently to those who focused on their heels.

When you slide the power switch on you will hear the motor burst into life. While the Micro-Pedi isn’t as loud as the Amope Pedi perfect, it is still loud enough to wake someone sleeping nearby. The sound is similar to an Oral-B electric toothbrush.

Before I continue I want to make a special mention that the roller will stop if you place too much pressure on it. This isn’t a flaw, it is a safety feature designed to stop you pressing too hard with an overly coarse roller and buffing your skin to the bone.

If you find yourself pressing hard enough for the roller to stop then the roller is not coarse enough for you. To overcome this problem you will have to buy a coarser roller, sold separately.

When it came to performance we noticed a fresh pair of AA 1.5v disposable batteries outperformed our rechargeable batteries (NiMH rechargables have a voltage of 1.2v). The roller would rotate slower and required less pressure to come to a halt.

So know full well that while the battery operated model is the cheapest, you are locking yourself in to buying disposable batteries for as long as you use your Micro-Pedi. If this is a concern for you then you are better of going with the Micro-Pedi Nano Corded.

With a name like “Extra-Coarse” you would assume that this roller is coarse enough for most people. To put it simply, it isn’t.

While testers with lighter calluses and smaller patches of dried skin sung it’s praises, those with thick and stubborn calluses found it took too long to remove the skin.

But unlike the a Dr Scholls DreamWalk Express Pedi which only has a single coarse roller, Emjoi offers multiple.

The the Super Coarse roller made all the difference. After swapping over, testers noticed a remarkable improvement in the speed that they were able to remove calluses.

The recessed roller head was the cause of much debate. Some testers loved it, others hated it. Testers who liked the roller commented on how well it performed under the toes and smaller areas of skin.

But when it came to the heals and other areas of the foot some testers preferred the entirely open roller of the Pedi perfect.

The Micro-Pedi Nano lives up to it’s name. Emjoi have managed to squeeze a powerful callus remover into a small size. Despite this, the handle is comfortable to hold and performance was impressive with the right roller chosen.

Be sure to check out the three variations of the Micro-Pedi Nano before commenting to the purchase. While the differences are subtle one is bound to be more suited to you than the others.

What we didn’t like is that there is room for error when choosing the Micro-Pedi Nano. Just how well it works for you will entirely depend on you choosing the correct roller for your skin. We would have preferred Emjoi to include the different rollers in the box allowing you to trial which works best for you.

Overall this is a solid performing electric callus remover at a decent price point.