The Conair Extreme Steam Deluxe garment steamer seems to be relatively under the radar, with relatively little buzz about it. Most customers seem to pass it over for its flashier counterparts. Let’s see if it’s an unmined gem or best left in the rough. 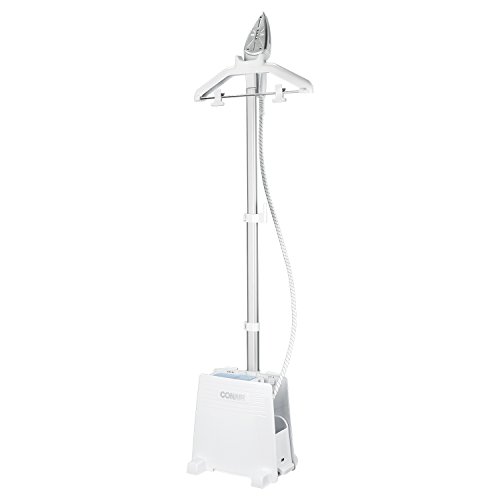 Conair is a well-known American brand that develops and manufactures health and beauty products as well as kitchen and electronic appliances.

Note, however, that the Conair garment steamer is made in China, while this video was made in Canada.

The Conair Extreme Steam Deluxe garment steamer looks like a peculiar amalgamation of garment utilities—a clothing stand, a hanger, and even something that strongly resembles a dreaded iron, all stuck together.

The stand is made of telescoping tubes so you can adjust the height.

It comes with a fabric brush and a soft cushion brush that you can attach to the garment steamer.

The reason it looks like it has a little iron attached is that the steam nozzle is meant to lend some dual functionality as an iron of sorts. It also comes with a crease tool so you can attempt to add in that sharp fold that makes your clothes look freshly ironed. (I say attempt because, hey, it’s still a garment steamer.

You’re not going to get that freshly pressed look without an iron. More on this in the Pros and Cons section below.)

There are wheels under the base, which can be a double-edged sword. On one hand, it makes it really easy to roll the garment steamer about.

On the other hand, you don’t really want your garment steamer rolling off on its own when you’re trying to use it. Fortunately, it’s easy to wedge something up against the wheels when necessary.

The Extreme Steam doesn’t spew out water randomly like some of its counterparts on the market. However, a certain amount of moisture seems to be unavoidable in any model because of condensation at the nozzle.

Expect some water spots and plan accordingly—you may want to use distilled water to avoid white stains when the water dries, and avoid steaming your clothing a minute before you need to wear them.

We don’t have any real complaints about the Conair Extreme Steam. It’s a very solid device that we can’t really believe is available at this price. To get the next step up in quality you’re going to have to lay down another $100.

About the only complaint that was made of it is that it doesn’t really work very well for giving you that super-crisp pressed look for business suits and the like. But honestly, we all know that isn’t what a garment steamer is meant to do, despite the Conair’s attempt in that direction with the iron-shaped steam nozzle and crease tool.

The Conair Extreme Steam Deluxe garment steamer is a hidden gem that deserves much more attention than it gets. In terms of value for money it’s one of the best fabric and clothes steamers that we’ve ever seen.

As a mid-priced garment steamer that works well and adds little conveniences like a crease tool and a dual-purpose steam nozzle-iron, it’s going to be a fine addition to many American homes.